Sandstone ballast is a product that is made from a large sandstone block or boulder which has been broken down into smaller slabs using a large diamond saw. The slabs that have been made are then cut into even smaller blocks using a handheld diamond saw. Generally they are cut to a maximum depth of about 40mm deep. This allows a groove to place a steel wedge or gad which is hit with a sledge hammer several times to split the stone in order to give it that natural split face look. 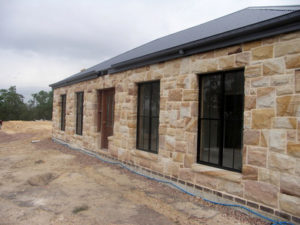 This procedure was carried out differently before the introduction of modern machinery. Large rocks were marked along the face and the sides using a marking hammer which would give the stone a weak point. Then gad holes would be chiselled out using a steel point to give a V shaped groove in the stone for the gad. This would be cut deep enough so that the gad would not hit the bottom of the hole.

The gad would then have the tapered end wrapped in newspaper before it was tapped into the hole and hit many times with a sledgehammer. These gads would be up the side of the block, across the top  and down the other side of the block. They would be hit one after the other until the rock would split, with the crack running to where the stone had been previously marked. This process would be repeated basically the same way until all the stones were made into the sizes needed.

Sandstone ballast production methods have come a long way compared to the way they used to do it – but the product itself hasn’t. Ballast is used in many applications including retaining walls, houses, garden edging, stone steps, fireplaces and feature walls. This product ages with time, but never goes out of fashion and brings a natural and timeless look to whatever the project is.

The ballast can also be dressed to give a different look and style. An example of this is ‘rock faced’ which is where the stone is hit hard around the edge of the stone with a hammer and bolster to give it a more natural exposed look and the stone protrudes out of the wall face slightly. This is the most common style used by stonemasons and landscapers today. It is a timeless way of dressing the stone that goes back hundreds of years but is always popular, even in modern homes.

Sandstone ballast is a great product which anyone can attempt to lay if they are keen… it’s a bit like a jigsaw puzzle where you cut rocks down to fit the size that is required. It is great for retaining walls/entrance walls, garden edging and driveway entrances.

We can stack on sandstone ballast orders onto pallets or they can be loosely loaded on to truck. We deliver anywhere in the Sydney Metro region or you can organise to pick up from our yard.

For all enquiries give Sydney Sandstone Cutters a call on 0407 455 293 to discuss your project needs.

How to lay sandstone ballast

Want to know more about our quality sandstone products?

1. Firstly, dig a trench for footings depending on the size of your wall. If you are building a wall 1 metre high you will need to dig it to a depth of 300mm deep x 400mm wide. Place reinforced steel in the trench which is then filled with concrete.

2. Lay your first course of stone using cement. Sandstone can be shaped and rock faced using hammer and bolster to fit between other stones.  Keep your first course staggered in height so you don’t have straight lines. Remember to use a string line for the length of the wall keeping it straight and moving it up throughout the job.

3. Use small pieces between the lower stones in order to meet the height of the taller one next to it. You can then place another stone on top of both of those, breaking the bond of the vertical joints i.e do not have straight vertical joints as this will weaken the structure of the wall and it is very likely to crack. Keep laying the stone until you reach your required height.

4. When you have reached your required height you can finish off the top by ‘rock facing’ the top of the stone as well as the face. Or use capping flagging rock or diamond-sawn stone.

5. Cleaning the cement off the stone needs to be done at the end of each day otherwise it will stain and it’s very difficult to clean off once it’s hard. This can be done using a bucket of water and a stiff bristled brush.